What exceeds the fun of having all the renowned super heroes and super villains in one free app? MARVEL Future Fight [Free] brings to you the heroes of The Avengers along with Spider Man and much more famous figures from within the Marvel world. Of course, this action-packed game has gained further attention in the release of Avengers: Age of Ultron which has been much anticipated by millions of Marvel fans.

The game comes with amazing 3D graphics which serve justice to the meticulous design of the super heroes. You will have 3 characters on your team as you fight your way through story mode to save the multiverse. The beautiful thing about this game is that it genuinely brings the comic books to life on your screen. ”But so do other games!” you might argue. Well, true. However, here is why we decided to add this game to our list. While it does include in-app purchases this game does not push you to pay in order to unlock anything. In fact, acquiring game currency in MARVEL Future Fight is much more easier than other Free-to-play games.

What we absolutely loved is the fact that you can summon another super hero to fight along by your side. We chose Captain America as our main character and went on a ruthless destruction mode. We definitely enjoyed kicking backsides along with our teammate Spider Man – Good Game Spidey! The visual effects of each character’s special attacks are staggeringly MARVELous – pun intended. On the other hand, the downside to the game is that your energy bar will decrease and if it diminishes then you cannot play for the day but we cannot say that the game was not generous in refilling it. All you have to do is complete more missions successfully. In addition, there is an Arena mode were you can unleash the madness on multiple enemies which we found to be quite brilliantly done. 3vs3 PvP battles are also included in the game which only makes it all the more enjoyable and challenging. Can you find the perfect team of super heroes to counter someone else’s team? You get to choose from 4 unique hero types: Blast, Combat, Speed and Universal. 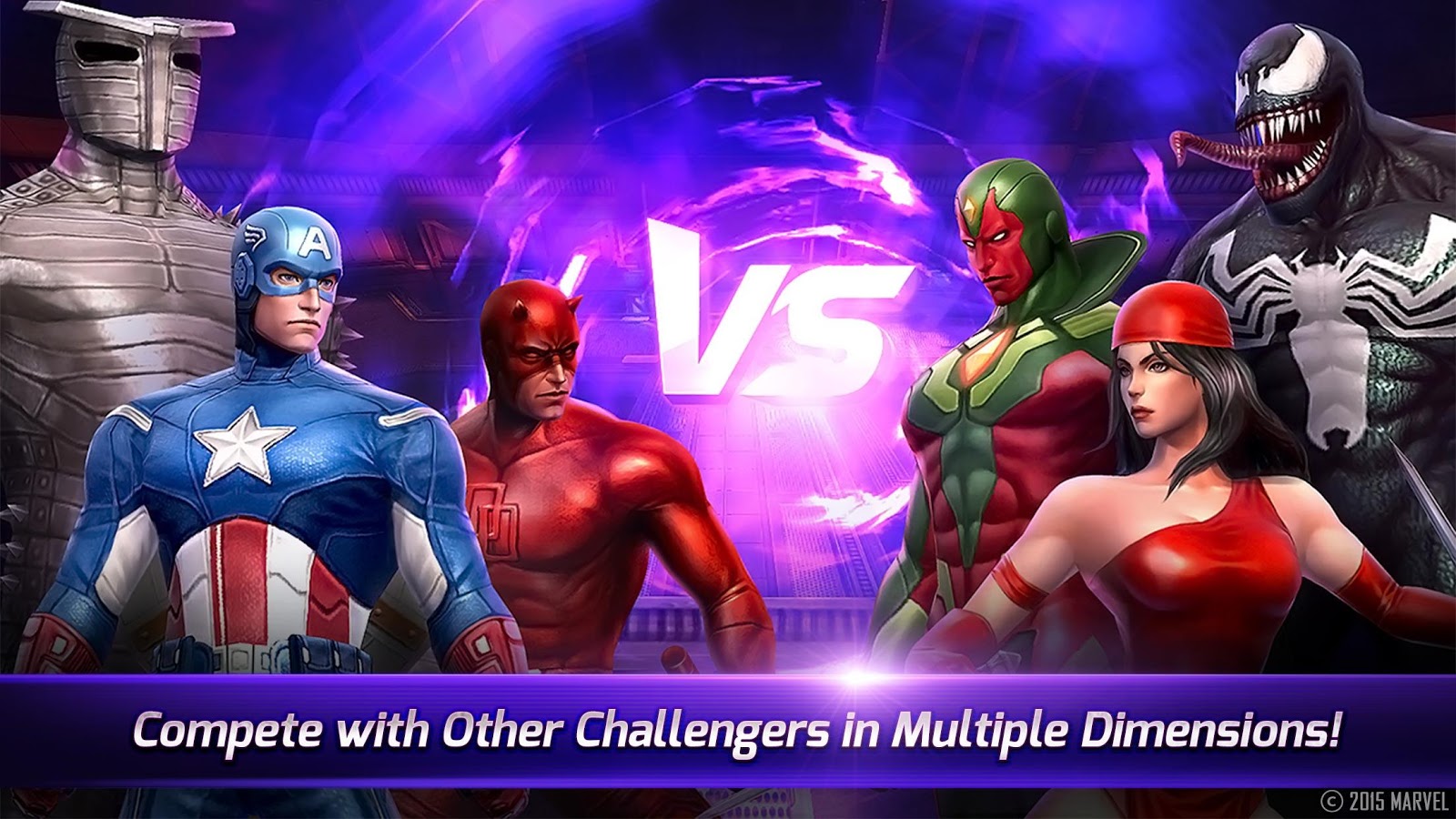 Play online and find out who masters the super characters best!

The story mode was entertaining although came across as typical in nature but it is understandable because the game was not designed to be a drama thriller but a mixture of Beat ’em up and Action RPG. Nevertheless, you will have to save the multiverse from a new plot that the super villains have come up with. You will use approximately 40 super heroes throughout the single-player campaign to save the precious Marvel universe; all which are unlocked gradually. You can unlock these characters through the Biometrics currency which is not hard to collect if you actively play the game.

Furthermore, character customization is rich in this game which adds to it a feel of RPG. The game allows you to increase character strength or even teach your favorite character new special attacks that are worth to witness in action. You will definitely enjoy using your favorite action figure to beat the bananas out of evil villains, especially that the game incorporates a comic book effect during story and action mode. Interestingly, the developers installed a chat system that contains 999 rooms where you can interact with other players. We found the chat rooms that we checked to be quite dead but they may become increasingly active once more players download the game.

In regards to the control system, it was designed for those who adore the classic on-screen joystick as well as for those who prefer the novel tap-to-play while using one finger only. Luckily, the game allows you to choose which control system you prefer at the start of the game which we found to be very considerate for those who prefer one over another. Both systems felt intuitive and easy to use but we preferred the classic on-screen joystick because it just added some interactivity to the action.

In conclusion, MARVEL Future Fight is a remarkable brawler that nails it on gameplay system. After all, games were designed to deliver fun and this is exactly what it delivers. There is no doubt that game details were carefully thought through by the developers as you see your action figure in superlative details using celebrated attacks. With its wonderful sound effects, rich controls system, amusing gameplay, competitive online system and heroic storyline, MARVEL Future Fight has proven to be a worthy title regardless of the agony that in-app purchases bring along. If you want to experience a fresh brawler game that has set new grounds on how super heroes are controlled then this is the game for you. Do make sure that you save the multiverse from the treacherous plans and plots of the evil villains, we do not want to be eliminated merely because of your lack of skills. You can check the trailer for this game below.