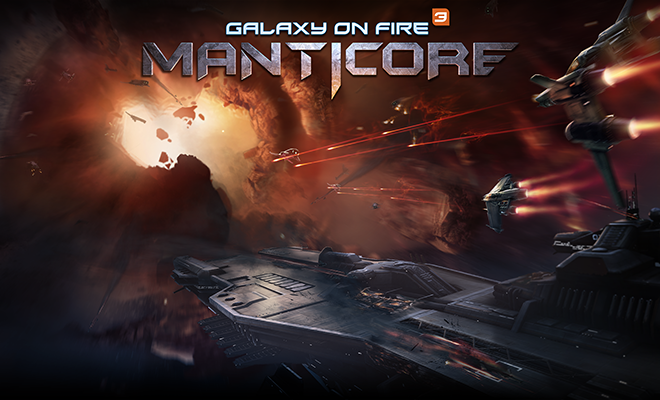 Do you remember when Galaxy on Fire was first released to mobile devices? Gamers were simply astounded with the visual charm that has come to a developing platform. These were the days of mobile ascension and identity maturation for the mobile industry. A franchise like Galaxy on Fire played a large role in giving mobile gamers the high expectations for the mobile games of today, and it is with this recognition we write about today’s title, Galaxy on Fire 3: Manticore. Let us briefly tell you some history about Galaxy on Fire to begin to understand what this franchise actually represents. Developed by Fishlabs Studio, Galaxy on Fire 3D, the original space combat simulation game was first released in 2006 providing a compelling experience that was meant to be memorable for years to come.

In 2009, Galaxy on Fire – the first of its kind, was debuted as the leading space shooter & trader on mobile devices causing a waves of excitement among iPhone users. In 2010, the second instalment was released winning the German Computer Game Award; thus securing a bright future for a fabulous franchise. Gamers were speechless, they have never before seen such a game with killer graphics that induces a realistic space shooter – trader experience like Galaxy on Fire 2. The German developer will further release an HD version of the second instalment and another title Galaxy on Fire: Alliances in 2013. The developers have fully supported each of their title with a large amount of updates for years; proving to their customers that they are a company that does not desert its fan base.

After Deep Silver acquired Fishlabs in November 2013, and re-branded the studio as Deep Silver Fishlabs; the revamped company promised even better Galaxy on Fire experience. Now we hear that Galaxy on Fire 3: Manticore is coming to mobile devices and you can imagine the excitement, happiness, and surprise that we underwent upon learning of this. Unfortunately, the game will be released in 2016 for iOS & Android, so we will have to wait until next year but it is absolutely worth waiting for.

The plot will revolve around the far-off Neox Sector, described as ”a lawless fringe area of known space terrorized by ruthless warlords and greedy mercenaries.” You will continue your work as a bounty hunter that will be after the blood-thirsty warlords of Neox Sector. This title is expected to be larger than any game in the company’s previous history and will be a game that will lead in its genre. It will remain true to its Sci-Fi driven shooting & trading theme while unfolding a captivating story to follow and a colossal universe to explore.

Finally, since the majority of developers are trying to have their games become a part of the Apple TV platform, developer Deep Silver Fishlabs also announced that there will be an exclusive title designed for the Apple TV experience dubbed Galaxy on Fire: Manticore Rising, a prequel to the mobile version that will provide more background story to the game. Additionally, if you want to try the game earlier than the official release date, you can apply for the Beta testing by clicking here. We are all excited for this title and will be bringing more news about it, so stay tuned with our website to learn more. You can watch the trailer for this game below.