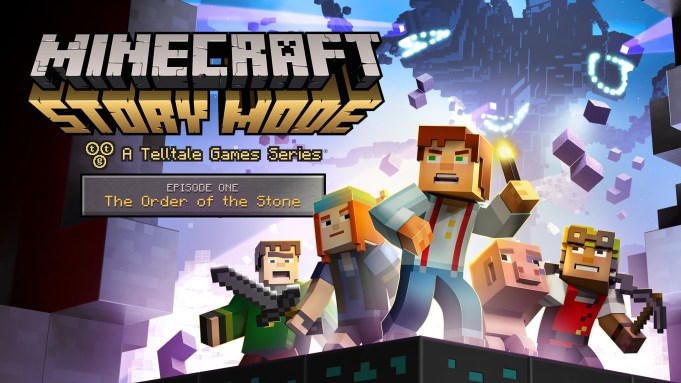 It almost feels like yesterday when we last wrote about Minecraft: Story Mode to announce its release date, October 15th (Just 2 weeks away from now). Today, we bring to you the newly released trailer for Episode 1 – The Order of the Stone which we greatly applaud. Behind the plotless Minecraft franchise that we used to know, lies a rich story that is very well presented. With a collaboration between the legendary Mojang and the successful Telltale Games, surely Minecraft: Story Mode will be better than we imagined, at least the trailer is very promising.

Minecraft: Story Mode is a 5 episodic adventure series that will, somewhat, mirror the interactive gaming style of other Telltale Games titles such as The Wolf Among Us and Game of Thrones. This is not a bad thing; both titles were massively successful and super fun to play. As we mentioned in previous articles, high profile voice actors have played a role in the making of this much anticipated game (click here to learn about the voice actors of Minecraft: Story Mode).

Players will control protagonist Jesse throughout the season, as portrayed by actor Patton Oswalt. Jesse and his group of friends revere the legendary Order of the Stone; four adventurers who slayed an Ender Dragon. The Order are the very best at what they do: Warrior, Redstone Engineer, Griefer, and Architect. While at EnderCon, Jesse and his friends discover that something is wrong… something dreadful. Terror is unleashed, and they must set out on a journey to find The Order of the Stone if they are to save their world from oblivion.

So without taking more of your time, we would like to tell you that this is a game that is worth waiting for. With talented voice actors, a collaboration between globally renowned developers, and a game setting in the amusing Minecraft universe; what more can we really ask for? Stay tuned with our website for more information on this game. You can check the official trailer for Episode 1 of this game below.