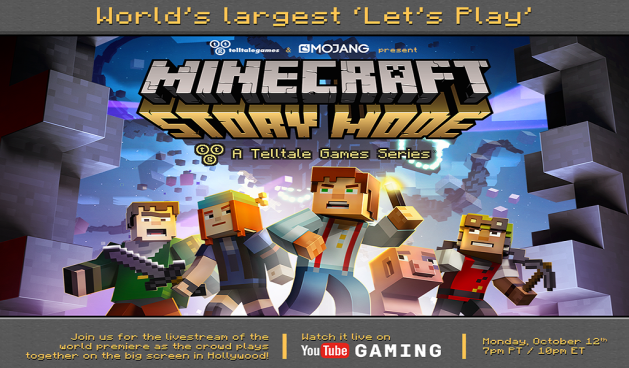 Perhaps in the history of Telltale Games, there has never been a bigger moment than their ”World’s Largest Let’s Play” Livestream event that will take place this October 12th at 10 P.M. EST. Of course, this comes on the same week that Minecraft: Story Mode is set for release. The livestream will reveal more about the game than what the trailer has shown.

The company has been the most successful, by far, in creating interactive games on mobile devices. They are very well known for The Walking Dead, The Wolf Among Us, Game of Thrones, and many others. Similarly, Minecraft: Story Mode will be an episodic interactive game; releasing its first episode, The Order of the Stone, on October 15th.

The event will take place in Hollywood, California, at the ArcLight Cinerama Dome; where countless Youtubers and streamers are expected to attend. Considering that Minecraft has millions of fans worldwide, this global event is going to be close to unprecedented.

For those that cannot attend, you can watch the stream live through Youtube Gaming by clicking here. Obviously, Minecraft: Story Mode is far from similar to the original Minecraft in terms of gameplay but they share the same universe and this can be good enough for global fans to be interested. After all, it is a game that we all either, played to enjoy or watched out of curiosity. You can watch the trailer for Episode 1 of this upcoming game below.