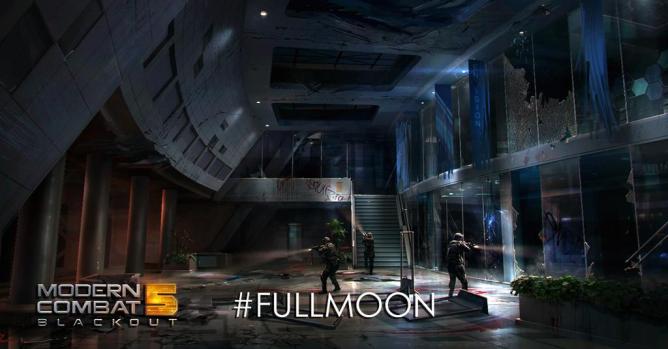 It appears we are not done with Gameloft’s surprises just yet. Today, a Twitter account associated with Gameloft Bucharest tweeted the above image with a FULLMOON Hashtag; implying that the next Modern Combat 5: Blackout update will be related to the image posted. We know that there is a full moon just right before Halloween, and we also know that there is an update in the plans to be released before Halloween as well. So it all makes sense, right?

Well, not really. Gameloft is being very ambiguous as to what might come. However, there was a reference to this Friday (October 16th) which can be the release date for the update. We certainly hope so because the image definitely caught our attention and yours. We suspected that it might mean that a new map is coming, but in a response to this question on the Twitter feed, they replied that a new map is not yet coming.

The whole image theme looks Halloween-ish and it tries to grab your attention on a holistic level. But when we zoomed closer to the wall in the image, there was a written text ”SMG 10” which can hint that the update will have a new Sub-Machine Gun. Whether this is the case or not, we cannot tell you for sure, but it is a plausible theory to propose considering the vagueness of this photo.

Finally, there were Modern Combat fans that suggested it might be a new zombie mode; a very unlikely addition at the moment. Nevertheless, we wanted to keep you updated with the Modern Combat series and we will bring to you the latest information that comes to our attention. Vote below for what you think might be the meaning of this image.