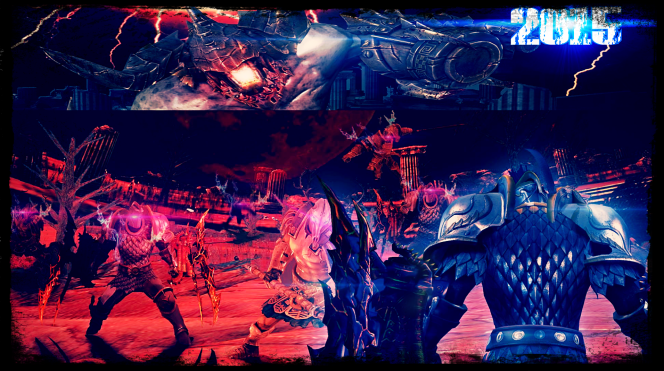 The shadow of 2016 has reached our doors and we are set to enter a new year with new mobile games. But before leaving 2015 behind, we wanted to share with you our list of the best 15 mobile games of 2015. This year has been full of epic moments defined by worthy titles, and the epic cover for this article is best described by the artwork of Ire: Blood Memory that puts the year 2015 into perspective – a year of intense competition between excellent titles. As you can imagine, it is hard to choose 15 titles out of all the amazing games that have been released this year. Do keep in mind that this list includes only the games that were released this year, so if you don’t see wonderful games like Vainglory on our list, it’s because it was first released in 2014. You may or may not disagree with our #1 choice and we can understand that opinions are different and diverse, that is why you can vote for your #1 game at the end of this page. We tried to be as unbiased as possible to the point that some games that we personally love didn’t make the list. Our criteria was mostly based on popular demand of the mobile community worldwide and included our professional analysis of what each title delivers. Without further ado, we present to you the top 15 mobile games of 2015!

Atypical Games are no strangers to success. Their titles are one of the most visually superior when compared with others. Their most recent game, Battle Supremacy: Evolution [$4.99], was released this year without getting a fair introduction or proper marketing, and this may be a reason why you have not heard of it. But with this new futuristic game, you will find yourself roaming futuristic cities with lush landscapes and destructible environments. Some maps will include paradise-like environments and others will be the parallel of a post-apocalyptic world. With all these massive maps to battle on, you are given a vehicle that can morph into a Tank, Drone, or Jet. If any game has captured all the elements of futuristic warfare under one roof, it’s Battle Supremacy: Evolution.

Probably the most anticipated racing game of 2015, Need For Speed: No Limits [Free] had gamers waiting for it for a very long time due to its prolonged soft launch status. But we can say that all this wait has not been in vain. EA made certain that the visuals were spectacular, the racing experience lived up to the franchise, and the tracks were challenging. Having the Need For Speed franchise thrive on the mobile platform is definitely a victory for us. This time, you are not facing off against racers only, but cops will be on your tail and how you elude them defines your racing skills.

When NetherRealm & Warner Bros. released Mortal Kombat X [Free] to mobile, it had a huge impact on players. For the first time ever, mobile gamers had Mortal Kombat X, with all its characters and fatalities, available for them to enjoy. It is true that its gameplay mechanics are not very unique yet it brings to life the franchise’s classic fighting in beautiful visuals and gory battles. Most players would argue that a popular title like this one cannot be shunned away that easily.

It is an established fact that the best third person shooter game of 2015 is Afterpulse [Free]. With its console quality graphics and intense combat experience, Afterpulse stands as a game changer in the TPS genre. The game is currently one of the few popular shooters on mobile and regardless of its freemium nature, Gamevil continue to support it by offering players free weapons every now and then. If you think you are a competitive player, then enter the Multiplayer arena and face off against one of the fiercest gaming communities yet.

This is one of rare titles that you will find on the mobile platform. What this game will help you explore is a rudimentary aspect of human suffering and it is this grisly element that has been the inspiration behind This War of Mine [$4.99]. This title puts you in a position of both, power and weakness, where you get to decide whether to save a life or go against your conscience to survive. I is inspired by real life events and puts you in the position of a civilian, rather than a soldier. If you want to face your darkest fears and ponder upon the most morally testing of decisions; then have a try at it. The game, as of this article, is on a time limited discount so this is the best time to get This War of Mine.

You heard of many survival horror games for the mobile platform, but none achieved the quality and immersion that Radiation Island delivers. Do not be fooled by its cheap price of $2.99. This is as premium as a game can get on IOS. Truly, the developers captured the world that we all dreamed for on our mobile devices. The beautiful island’s scenery looks as if it was copied from a Far Cry game; combining a living island in every element that you can imagine – from the changing nature of the sky to the detailed beauty of a butterfly. You definitely get more than what you pay for in Radiation Island and by far seems to be one of the safest investments you can make on a mobile game.

Just released this month, Grand Theft Auto: Liberty City Stories [$6.99] has been designed with mobile in mind. It brings the classic experience that was once on the Play Station with improved mechanics and enhanced visuals. You will be the reason behind the mayhem that will fall upon Liberty City as you fight your way for the strong Leone Family. Grand Theft Auto is a franchise that every true gamer must experience, and now you have it within the palm of your hands.

The sequel to the best MMORPG on mobile has definitely been a delightful world to explore. From the perspective of different races into the mysteries of different regions, you enjoy a memorable adventure along other online players. Order & Chaos 2: Redemption [Free] has been Gameloft’s best title of 2015 and is certainly among the top 15 games on mobile. You can rest assured that you will always have something to do and won’t get bored of it any time soon.

A world renowned RPG franchise, Final Fantasy is a title recognized by almost every gamer beneath the sun. Its first instalment was initially published in 1987. And yet to this day, this franchise is still loved by many millions around the world. The world of Final Fantasy VII [$10.99] is set in a post industrial era. Its story is mostly set in the capital city of Midgar, a grand metropolis that houses the headquarters of the Shinra Electric Power Company, which reigns as a de facto global government. The company’s iron grip over the Mako energy production is relentless and the energy reactors are destroying the planet. You play as Cloud Strife, a former Shinra elite soldier who has now joined Avalanche, the revolutionary group that are standing up against Shinra’s corporate greed. Thus, the fight for the planet’s future begins.

”You will die a lot in this game” promises Tenbirds Corp., a development studio heavily inspired by the Gothic world of Bloodborne and the brutal difficulty of Dark Souls. Ire: Blood Memory [Free] is a killer combination of RPG and Strategy where you feel abandoned, thrilled, and excited all at once. Nothing sets the melancholic scene better than the upsetting impaled and beheaded corpses that flood your screen. With a massive update coming to this title in 2016, it is highly recommended that you immerse yourself into its world starting now.

With a Mojang & Telltale Games collaboration; the concocted by-product takes the name of Minecraft: Story Mode [$4.99], a 5 episodic, narrative-driven adventure series. This has become one of the most anticipated titles since its announcement due to the high profile voice actors that have participated in its creation. Minecraft: Story Mode will be an interactive game that looks and feels like Minecraft & is consistent with its universe but cooked with Telltale’s ingredients of role-playing and decision-making. Whether you are a fan of Telltale Games or Mojang, this title will take you on an original journey like never before.

From Critical Force Entertainment, the creators of Critical Strike Portable, comes Critical Ops [Free], a mobile fast-paced FPS that is currently available for PC and Android, while set for release for iOS in early 2016. In such a short time, the game has gained momentum among competitive players and clans as it continues to be the platform for tournaments. This title revives the once beautiful days of Counter Strike as it is similar to it in many ways. With ergonomic controls, strategic maps, and balanced weapons; the game is currently the best first person shooter on mobile. And the best thing about it is that it does not support a pay-to-win model.

There is always this curious need in humans for the mysterious and paranormal to exist. It shapes our lives in religious & spiritual forms, and in many ways, scientific. This whole concept is very well integrated into the fabric of The Room 3 [$4.99]. The Room 3 is the much anticipated sequel to the BAFTA award winning title, The Room & the Best of 2013-14 awarded title, The Room 2. We can best define The Room 3 as the perfect fusion between mystery and thriller on a level that no mobile game has ever reached yet.

If you are a nostalgic for the classic survival horror titles like Resident Evil or Silent Hill then this game is going to interest you. In fact, not only is it extremely similar to the Silent Hill theme but one of the main voice actors happens to be the legendary Guy Cihi. Forgotten Memories: Alternate Realities [$4.99] is a third person shooter that tries hard to live up to the psychological horror standard that the classic survival horror games have set. You play as the protagonist, Rose Hawkins, who is looking for a missing child in a terrifying asylum but the deeper you look the scarier the discoveries become. We previously crowned this game as the Best Horror Game of All Time.

We thought a lot about which game deserved to be the best game on mobile for 2015. We can assure you that it was not an easy choice because there are a myriad of original and beautiful games that came out this year. But we can only choose one, and for this year, we choose Implosion: Never Lose Hope [$9.99]. It blasted the App Store as one of the highest rated games yet. The reviews seemed to be consistent in praising this premium hack n’ slash themed game. Rayark Inc. has developed this fast paced game with extremely vivid graphics that are console quality worthy. It combines the complex world of robotics with the horrifying world of deformed mutants to bring about a post apocalyptic experience that is rather compelling. If you ever wished for epic battles against gigantic and intimidating monsters, then no game delivers the experience better than Implosion: Never Lose Hope.