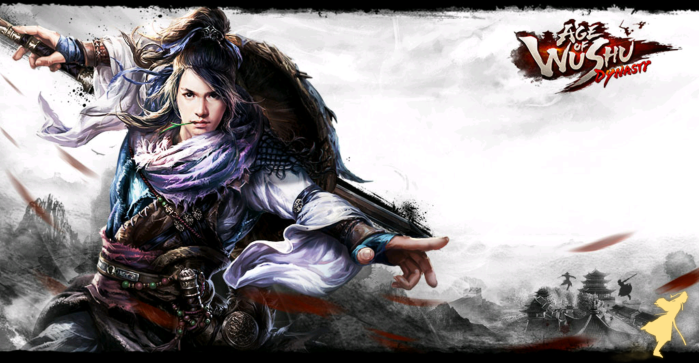 Truly, we haven’t seen a unique title for a very long time and Age of Wushu Dynasty [Free] has given us hope that the mobile platform can successfully host games that are unique, ported, and inspiring. Since the game was first announced, we were anticipating it with excitement due to its gorgeous graphics and its portrayal of the rich Chinese culture. Since it was first released in 2013 for PC, the game has been very well received by gamers. Coming from the extremely talented company with over 15 years of experience, Snail Games has entered the mobile industry with interesting titles such as Taichi Panda and Heroes of Gaia. In addition, they are well known in being innovators of several mobile technological products.

The 3D Martial Arts MMO stands out for its beautiful visuals and has been designed with the same formula of Taichi Panda. The fantasy world is based on medieval China’s Kung Fu era and the plot is based on a conspiratorial attack from trained assassins and foreign invaders against the Chinese Empire. You start the game by choosing your character. You can either select Master or Apprentice based on any of the four schools: Shaolin, Wudang, Emei, and Tangmen. The Shaolin school offers a male character only, while the the Emei school offers a female character only. The other two give you the choice to select a male or a female.

The Shaolin are monks that utilize their staff for powerful long-ranged attacks while casting spells to destroy enemies surrounding them. The Wudang specialize in defense tactics and fight with swords. The Emei’s power depends on their ability to balance offense and defense, using their daggers to deliver high amount of damage. The Tangmen base their fatal blows on their use of poison and have daggers that are designed for short-ranged battles. When it comes to choosing, all characters have proven to be strong fighters and your choice depends on your fighting style preference and character features.

The fact that the game focuses on martial arts most makes it unique on the mobile platform. However, unlike the PC version it is less open world and more mission-based. There are different locations which you can travel to and complete missions in. You will notice online players which you can chat and socialize with. It can be argued that the game was built around a social system that, in fact, promotes online interaction between players. Snail Games allows you to enter a huge PvP arena where you can fight your way to the top. A great feature is that you can battle via Guilds in PvP Guild Raids. So when we say it is a game built on an online social system, we are not exaggerating!

The combat system is developed with the use of modeled animations from prominent Kung Fu masters. With numerous attacks, blocks, and special moves, you will perceive a genuine Kung Fu experience that is rarely found in the mobile games of today. With its beautiful graphics and artwork, Age of Wushu Dynasty immediately attracts you to its rich universe. The developers seem to have detailed everything, from how an attack is simulated to the genuine make-up of the environment around you.

Moreover, through the use of a virtual joystick on the left side of the screen you can move your character very smoothly. You can attack via several buttons on the right side of the screen that will unleash special abilities. Parrying is also an option during battle and can stop an enemy’s attack and could deliver a powerful counter-attack. Although the quests given to you happen to be linear, you will find them somewhat entertaining due to the intense action you encounter. To those who prefer a simple quest system, there is a button in the game which will automatically guide your character to the quest’s location.

In conclusion, if there is one single word that can describe the complexity and creativity of Age of Wushu Dynasty, that word would be ”exceptional.” For its rich online system, gorgeous fantasy world, great cultural emphasis on medieval China, and intense Kung Fu battles; the game differentiates itself by creating a unique sub-genre that is unprecedented in the mobile gaming industry. If there is one thing to complain about, that would be its freemium model that is based on in-app purchases. But then again, this title is offered for free and can be reasonably played without having to spend real money. Having said that, considering the extremely high quality of the game the developers deserve any money spent on it. If you are an MMORPG player then you will find great interest in Age of Wushu Dynasty as it offers a unique world unseen before that’s designed with vivid colors which amplify its allure even more. An interesting aspect is the background music which seems to complement the fabric of this title really well. With all that it delivers, you won’t find a more complex and educational adventure than the one that Age of Wushu Dynasty offers. You can watch the teaser trailer for this game below.