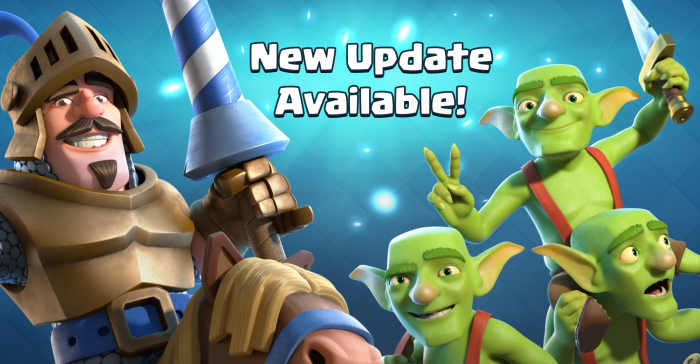 An unbelievable update has come today to Clash Royale! Not only did we get Spectator Mode, but we also received 6 new cards. This adds a whole new mix into the formula of deck building. You can now spectate while your friends are playing Friendly Battles. Now there is another reason to eat popcorn. In addition, you can now filter through TV Royale Channels based on Arena.

What is even more exciting is the introduction of the 6 new cards. There is 1 new Common Card called Fire Spirits, which are 3 small fire creatures that are on a kamikaze mission. They are very fast and explode upon coming in contact with a enemy troops. A new Rare Card has also been added by the name of Furnace, which spawns two Fire Spirits at a time for a total of 12. As for the new Epic Card, it brings the Guards, 3 units that carry a strong shield but weaken once the shield falls. They look like a mini Giant Skeleton.

When it comes to Legendaries, 3 new cards have been introduced: Lava Hound, Sparky, and Miner. The Lava Hound is a majestic flying beast that has 2900 HP and causes 26 damage per second. When it is destroyed, it releases its angry baby hounds to attack. This card targets buildings only. Furthermore, Sparky is a 1200 HP unit that causes 1300 area damage, although has a hit speed of 5 seconds. So you need to send with it strong units to keep it protected. Finally, the final card is the Miner, a goofy looking unit with 1000 HP and 160 damage. He can dig his way to any destination you wish without being detected. This unit targets ground unit and buildings only.

Finally, there have been several card balances which we wrote about before and you can read by clicking here. Now, you are more likely to get bigger rewards and better cards. We absolutely love this update and we believe that Clash Royale is now ready to be an eSports game. You can see the 3 new Legendary Cards demonstrated in the video below.