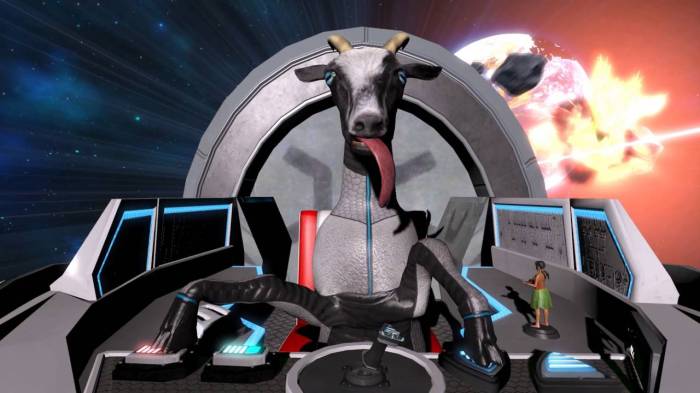 None dare enter the world of madness other than Coffee Stain Studios. This year, they surprise us with their new Goat Simulator: Waste of Space [$4.99] which has been just released for iOS. Although it is a standalone app on the App Store, it has been released as a DLC on Steam. This time, our favorite Goat heads to space to cause all sorts of mayhem.

The trailer of the game is hilarious with a background commentator that sounds like Arnold Schwarzenegger lecturing us on how we can Make The Galaxy Great Again! In the game you get to crowdfund a space colony and even have others contribute as well (more like stealing their money). You get to visit a space full of planets (no joke). Don’t forget to shoot stuff in space because what is a Goat Simulator without shooting, right? It also appears that this game has the biggest map in the whole franchise, so there should be a lot of places to explore.

Goat Simulator: Waste of Space targets several games with its parody, such as Star Wars, Mass Effect, Portal, and many others. They targeted Trump with the whole ”Make The Galaxy Great Again” and even bringing a commentator that sounds like Arnold. Did they just mock Kickstarter as well? Is there any game or any one they didn’t target? If you put your time into it, you will notice even more. The game is available now to be purchased if you find it interesting. You can check the trailer for this game below.