Darkest Dungeon is a roguelike dungeon crawler with RPG elements that was developed by Red Hook Studios and released for the` PlayStation & PC early this year. The game was very well received and is gaining wider recognition due to its psychological impact on the player. While it is not available on mobile, the developers expressed the possibility of it being released to tablets in the near future on their blog as they have ”designed a pretty cool touch interface.”

You start the game by leading a group of heroes through different types of dungeons where you encounter demonic creatures. The interesting feature about this game is that each member of your group will experience the encounters differently. Some may succumb to fear and slowly become insane while others become confused and demented. The psychological effects of the experiences are interesting to witness and truly differentiates this game from others in this genre. 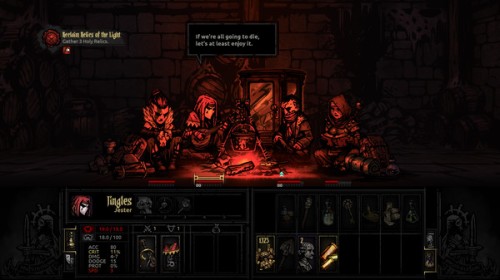 Emotions and mental states will also change with some members of your group where they can become paranoid, depressed, or even angry. All these psychological changes affect your gameplay and renders the adventure darker than you can imagine. Darkest Dungeon is a 2D turn-based game with Gothic-themed visuals. This is certainly a game we would love to play and you can check the trailer below to get a better idea on what Darkest Dungeon is all about.