Who amongst you is familiar with the progressive metal band Dream Theater? Okay, that’s a reasonable number of hands raised, so we can see some of you are. Well, it turns out that the Band partnered with Turbo Tape Games and just released a mobile game called The Astonishing Game [$2.99]. This game is based on Dream Theater’s thirteenth studio Album called The Astonishing.

The theme of the album revolves around a story where the Ravenskill Rebel Militia utilize music in order to fight against the Great Northern Empire of the Americas and their oppression. The story definitely contains progressive ideology in its content. As for the gameplay, it is similar to that of Chess in the sense that it’s a boardgame where you try to conquer enemy camps located at the end of the board. Victory is achieved by taking out 3 camps. 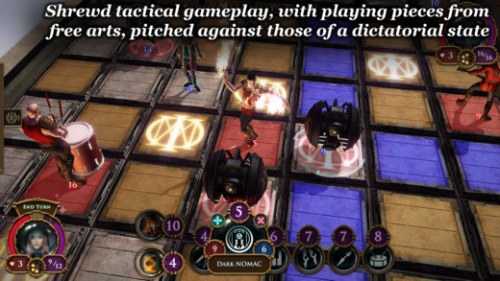 There is a single player campaign as well as a player vs player mode that can be played on the same device. The Astonishing Game also features instrumental music from the album and the option to freely enter exclusive competitions to compete for grand prizes during Dream Theater’s tours. You can watch the trailer for this game below.