Modern Combat Versus has soft launched onto more countries now. Previously it was available on The Philippines Store but now you can also find it in New Zealand’s and Australia’s App Store. As for Android users, you can now get early access. Following this update, the game now gives you free daily chests and now includes new Control Zone locations in the game’s maps.

The game is devoted to the multiplayer experience rather than campaign. You have 12 agents to choose from that are based on 4 classes. The Attacker utilizes an ability with wide range of utility that deals consistent weapon damage. The Defender supports the team with damage mitigation, high health power, and strong defense. The Assassin can cause high damage power but are vulnerable due to low health. The Specialist’s expertise lies in the disruption of battles with unique abilities and situational weaponry.

These Agents can be customized in terms of weaponry, skins, kill signs, and upgradability. Agents will need Core Charges to activate their abilities which can be aquired through gameplay experience. 10 Core Charges can be utilized at the same time and each ability can require a different number of Core Charges than the other.

In the soft launched version, there is a 4vs4 Zone Control mode available where each team fights to control the zones on the map. Furthermore, 5 maps are accessible in this version. The maps are called Apex, Sandstorm, Port, Blackrock, and Slums. Here is an interesting fact for those of you who have played Modern Combat 4: The Map Slums is based on the MC4 Map Dogdays so it should be quite a nostalgic place to battle in.

Similar to previous Modern Combat games, Modern Combat Versus has the left side of the screen for character movement & sprinting by holding towards a direction while the right side is dedicated for looking around & aiming by double tapping. The game also allows you to wall-run which seems very interesting and that can be activated in each map which has 2 wall-running points. All you need to do to wall-run in these areas is to sprint towards them. 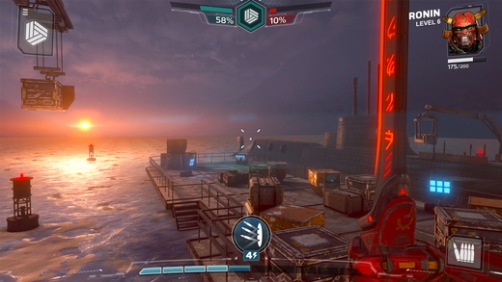 Finally, there are many factors in the game that are concerning to players. However, keep in mind that this is not the final version and by the time it launches globally, it might be different on many levels. Stay tuned with our website for more information on this game. You can watch the recently released Orientation Trailer for this game below.