Today, Blair Witch was released on the Nintendo Switch. This psychological horror title was initially released in 2019 on the consoles. Clearly, the developers have done a fantastic job in bringing such a vast experience onto your handheld device.

The story takes place in 1996, two years after the events that took place in the Blair Witch Project (the film this game is based on). You play as a former police officer who is helping in an investigation to look for a lost boy. You roam the haunted forest alongside your loyal dog who helps you investigate the case. The game keeps you in suspense of what is to come and very few games can give you that feeling.

The gameplay is overall good but it doesn’t come without its bugs. Interacting with your environment is not problematic and can be very responsive. Bullet, your dog, can be interacted with throughout the game and his presence with you can help you manage your mental breakdown and therefore, how you treat your dog can play a role in how he helps you or how the game unfolds. There was a bug where at times your dog is unresponsive but this doesn’t entirely break the game as it can be addressed by the developers in a coming update.

Some of the items that will help you on your journey are the following: Flashlight, Mobile Phone, Walkie Talkie, and a Backpack. Other items that you will find along the way to help you out are Tapes, Totems, Victim Photos, Psychiatrist’s notes, Carved Figurines, and others. 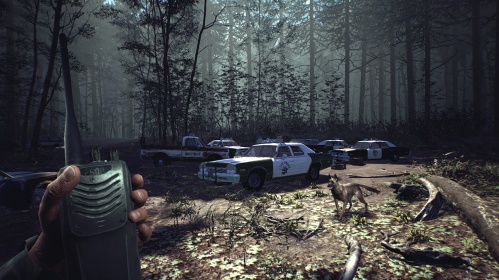 At the start of the game, you will find a Video Camera which will be an essential tool to play the the tapes that you find and connect the story as you find more tapes which you can watch. You will come to find out that the Camera will be used to manipulate your surroundings. To give you an example, if you want to open a locked door, you can watch the tape of the room where you are trying to open the door and pause the camera at a point when that certain door was open in the video tape, this will reflect on the reality you are in and cause the door to open. Furthermore, the camera will be used to help you see at night later in the game using night mode.

What keeps you scared in the game is that you know and sense that you are not alone but you have no weapons to fight with. Like Outlast, you will feel defenseless at times. Bullet is your main line of defense and will bark at anything that is potentially dangerous. Your flashlight can also be used to force some of the malicious entities to back off. 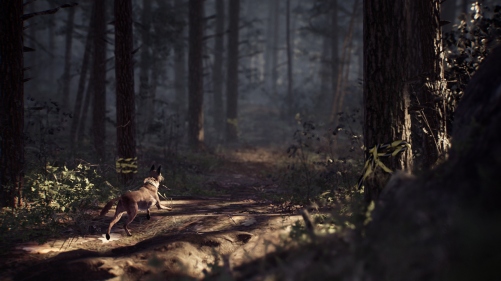 Blair Witch looks visually captivating on the Nintendo Switch, especially in handheld mode. We played it on the PS4 and while we do see some downgrades on the Switch version, the downgrades are not a deal-breaker. Perhaps the main difference is that objects in the distance take more time to load on the Switch when this issue is nonexistent on the PS4. You will sometimes notice trees in the background loading and this can make you paranoid since you don’t know instantly if it is an entity or a tree.

It is understandable, however, that visually the developers needed to cut some features back for a smooth experience. The game runs at 30 frames per second which remains constant almost throughout the game.

Finally, you can get the game from the Nintendo Switch Shop for $29.99. While the game is approximately 6 hours long, it is replayable since there are different endings to the story. The game does live up to its psychological survival horror genre and despite the visual downgrades and bugs, it gives you a mysterious forest to explore along with your companion, Bullet, which is quite satisfying. You should definitely add this game to your wish list but best to wait on it to go on sale rather than purchasing it now. You can watch the trailer for Blair Witch below.

One thought on “Blair Witch – A Nintendo Switch Review”