Welcome to Part 2 of Secrets of The Isle of Armor Series. [Click here to read Part 1 if you haven’t] As promised, we are presenting another new article in this series to cover more secrets that can be found on the island. Pokemon Sword and Shield is gaining more interest among new gamers and we are excited to see its fan base growing. Without keeping you waiting longer, here are more secrets that you can find on the Isle of Armor.

You can get Bulbasaur or Squirtle in Gigantamax forms! That’s right, if you haven’t finished the main story then you will be given these special starters soon. Keep in mind that you can pick one and Honey will take the other. However, what you may not know is that they are able to Gigantamax so be sure to level them up and evolve them into Venusaur or Blastoise. Since this is a new DLC and you will be invested in new Pokemon, it is easy to forget about these two but make sure to evolve them and experience their power in Gigantamax forms.

Did you know that the gigantic Wailord is in the ocean? Oh yes it is. In case you missed it, then go to the middle of the ocean where you will see this massive sea creature, none other than Wailord. Be prepared for it because it is really powerful and is level 80. To catch it you need to cross the sea right into the middle of the ocean. How to find it exactly? Once you leave the station on the Isle of Armor, to your right there is the Workout Sea. If you keep going the distance on your water bike then you will come across it and it is difficult to miss it because it is HUGE!

Did you know that you can trade Galarian Pokemon for their regional forms? There are white-shirted blonde female trainers available in different parts of the Isle of Armor map. If you approach one of them then she will trade you a regional Pokemon if you give her a different form. To give you an example, you can get a Kanto Mr. Mime if you give her a Galarian one; you can get a Kanto Weezing if you give a Galarian Weezing; you can also get an Alolan Marowak if you give a Kanto Marowak. There are many more but these are just examples. Keep an eye out for this white-shirted female trainer.

In the Isle of Armor, you have the option to get your favorite Pokemon to follow you on the island. When you reach the third trial that Mustard gives you, you need to beat your rival (Klara or Avery) and after that talk to Mustard. He will give you the option to have your favorite Pokemon follow you. Keep in mind that you need to have the Pokemon as the lead on your team because by default, the lead Pokemon will be selected. However, if you want them to stop following you, then go to the Dojo and approach the boy wearing a Pikachu costume. When you talk to him he will ask you if you like your Pokemon following you, if you say no then your Pokemon will stop following you.

Many of you might not want to pay Miss Honey the million Watts (as discussed in Part 1) because a million Watts is a lot. So we wanted to share with you the best way to earn Watts if you do want to go ahead and give her the 1 million Watts. First, you need to talk to Digging Ma who appears in random places on the island who can help you in digging for Armorite Ore. Then if you go to Digging Pa and give him Armorite Ore, he will dig Watts for you and it can be as high as over 100,000 Watts. Once they start digging, if they ask you to continue digging, it is better to stop Digging Ma and take what she already dug since the shovel might break during the process and you might lose what was collected. However, if you want to risk it and let her continue you might end up with much more Ore. Furthermore, participating in Raid Battles will get you a decent amount of Watts so don’t forget about that. 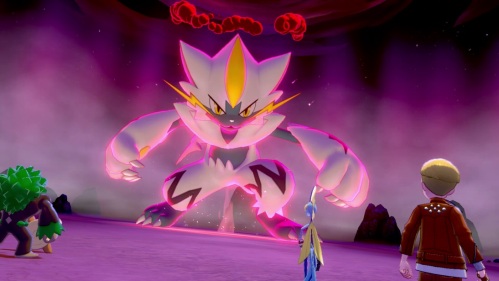 Finally, we enjoyed sharing these cool secrets about the Isle of Armor with you. Some of them you might have known, others perhaps not. Nevertheless, we will collect more secrets that can be found on the Isle of Armor to share with you. Be sure to keep checking back as we will keep these articles coming because we are huge fans of Pokemon Sword and Shield. Thank you for your time.