It is true that the Survival Horror genre has not been lagging behind in the mobile arena but the games that came out were not exactly what we wanted them to be. While Five Nights At Freddy’s had its jump scares, we wanted a game similar to the console dominating horror game Outlast – A  game where you get to free roam in a terrifying asylum and fight for your life. Thanks to Amazon Game Studios, they have just released the fascinating survival horror game called Lost Within [$6.99]. We immediately picked it up and tested it on our devices and low & behold, its survival horror aspects were genre-true to the core!

You find yourself inspecting a large but gloomy asylum in search of people before the authorities tear the down the building. You fall into a dark pit that takes you to the lower levels of the asylum where you experience eerie voices and see infernal monsters and psycho murderers. You are not armed at all and your only defense is tiptoeing without them seeing you, hiding when they chase you, or creating unconventional weapons to help you survive.

The controls are extremely simple and designed purely for mobile devices. You will discover when you start this game that your movement controls are tapping on locations for your character to walk to but this is not the only control system you are able to utilize. Luckily, you can bring the classic joystick control system on your screen by modifying the settings – we found this control system to be more convenient. You can swipe your screen to look around but the sensitivity was not as high as we would want it to be. We will inform the developers about it and perhaps this can be fixed in a future update. Nevertheless, we are satisfied with the control system as we found no real issue in it that affects its gameplay.

While the game is a Survival Horror genre, it definitely touches on aspects like Stealth. This may sound scary to you but monsters will chase you across the asylum and sometimes you will have to run terrified with that strange feeling of horror in your heart like a scared little girl. The only escape would be to find a hiding place, like a closet or a closed room. The first time we had to run, we were scared sh*tless! Another important aspect of the game is Crafting, an important system for your survival as you get to craft weapons to increase your chances of survival. Strangely, the game reminded us a bit of Bioshock in terms of monsters but the gameplay was more shadowed by aspects from Outlast. Not to forget! For the best experience, this game must be played with headphones on. In fact, we triple dare you to play it at night with no lights on while having your headphones on (Evil grin😈).

Surviving for your life becomes your new job

The story is quite captivating enough to keep you playing as you find remnants of old asylum documents that will bridge the story and you get to experience peculiar flashbacks that felt surreal and definitely had us on the edge of our seats as we played. You discover that beyond the nightmarish creatures that you have to go through there is a legendary serial killer on the loose. In short, things just get worse for you in that spine-chilling, abandoned ward and if you are a survival horror enthusiast, then this is the game for you. 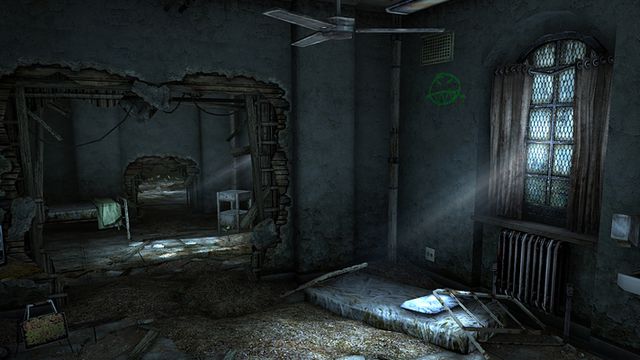 The games graphic design gives you a dreary feeling of hopelessness

The graphics are stunning for a survival horror game and it will definitely build up your adrenaline as you walk slowly through the dark rooms and haunted corridors. Much of the environment around you are detailed and console quality and it is no secret that you will find yourself intertwined with the world that Lost Within brings to you. Some rooms are exposed to outside light that make them look vivid which gives you a sense of hope but as you walk closer towards your demise, the creepy writings on the wall and shattered objects around you will kill the last of that hope you been holding on to.

In conclusion, Lost Within has surpassed the threshold to be considered one of the best Survival Horror games on mobile devices. The game will remind you of Outlast the more you play it and it is our belief that the developers have aimed for that substantial achievement. In addition, the gameplay gives you a sense of paranoia as you wonder whether the monster is outside waiting for you or is he just a little behind stalking you. We found this game to be a conventional survival horror with unconventional features that make the game even more interesting. You will feel as if trapped in a maze and the more you search for an exit the darker a history you will uncover. Lost Within is definitely the title we recommend if your experience encompasses being trapped in a ward for the insane; hunted by monsters as you run for your life; and having a captivating tale of horrors unfolding before you. The trailer can be seen below, thanks to Amazon Game Studios for providing it.

2 thoughts on “Lost Within – Review”